"Remix of Dreams" a group exhibition at Barbara Davis Gallery, June 29 to September 01, 2018 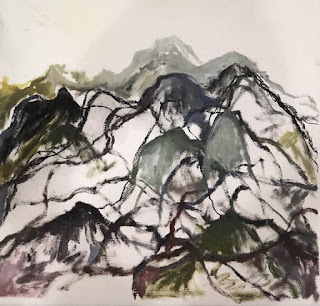 One day in June, Christy Karll sent a message, “I’m travelling with some other artists, currently in Vienna, hope to see you when I return.”
“You bitch,” I replied.  Surrounded by inspiring architecture.  I on the other hand was in Houston.
Soon after, I learned about “her mountain.”
She had traveled from Vienna to Salzburg, then to the village of Goldegg where she worked at Malakademie Schloss Goldegg, an art Academy housed in a 14th century castle.  From her castle’s studio window was a view of the High Tauerne mountain peak of the central eastern Austrian Alps.
The mountain affected her, Karll told me when she returned to Houston.  “I was obsessed with it.  Walking to the studio every day, and standing at the window, I observed the mountain at all hours of the day, became intimately familiar with its subtle nuances, its ever-changing light.  It spoke to me, I literally felt its energy coming through me.  Several artists there affectionately referred to it as Christy’s mountain.”
Naturally she painted it.  A painting of her mountain is displayed in Remix of Dreams, a group exhibition at Barbara Davis Gallery, through September 1, 2018.
Flashback some years.   We’re at the bar in Poison Girl, I’m drinking bourbon, Karll drinking Chardonnay, and all hell breaks loose if the Chardonnay doesn’t taste “buttery,” and we opened up to each other.  The conversation veered into such topics as multiple dimensions, time travel, and the ultimate nature of reality.  Ever since that moment, I search for esoteric “stuff” beneath the surface of Karll’s art.  Here’s what I discovered about her mountain:
Virginia Billeaud Anderson: This certainly isn’t the first time the art bounces off literature.   It hurts my head to think about your literary associations - Jung, Shakespeare, Christian, Tao, Hindu, Buddhist, and Gnostic sources, even Kepler, which is ridiculously complicated and which I refused to read.  You might be the only person on the planet to make a painting using the four colors that The Tibetan Book of the Dead asserts practitioners observe when in the Bardo state between death and rebirth.
Christy Karll: Yes literature.  I borrowed from Stephen Greenblatt’s book, The Swerve, to title my new mountain painting.  His description of atomic theory, what the ancients called atomism, explains how all matter is made up of atoms and subatomic particles.  This resonated, as you know, I believe in an animating force which runs through everything, even my mountain.  Please remember I’m also exhibiting a new sculpture, and I took its’ title from the Roman poet Lucretius’s poem On the Nature of Things, which anchors Greenblatt’s theme.  So, tell readers, two new pieces at the gallery, Swerve, my mountain, painted on paper, and On the Nature of Things in three-dimensional form.
VBA: Mountain images had been featured in your art for many years before you found your mountain in the Alps.  Focus on the subject has been on-going, in three dimensional and painting and drawing.  I recall an entire series of paintings and drawings based on jagged peaks.
CK: True.  Mountain images are deeply symbolic for me, they represent the cosmic force, known as the chi, while simultaneously alluding to self-knowing and transformation.  Here I’m referring to evolution from incomprehension to enlightened understanding, which is the integration of my psyche.  And remember from our 2014 interview, repetition is integral to my work.  I considered my repetitive practice validated when I saw the Tate’s Rothko exhibition.  Rothko said if a thing is worth doing once, it is worth doing over and over, exploring it, probing it.
VBA: The mountain image isn’t the only highly symbolic motif, another is the “twig bundle,” also sketched, painted and sculpted, a few splendidly in bronze.  The way I see it, your personal iconography is fundamentally a tool to focus the mind on that primordial energy, which I once saw described in the Vedas as “Pure Consciousness.”  I imagine you felt comfortable in India when you exhibited there in 2015.  In a place congenial to broader contemplation.  Tell me more about Goldegg Austria.
CK:  Wonderful.  Such a pleasure to concentrate on art without distraction.  It served as the perfect residency for me, not unlike when I was studying painting in school.  I was able to complete quite a number of drawings and paintings.
VBA: I’m moved by your composition’s fluid brush strokes, as well as its’ tonal contrasts.  Dark and neutral passages are interrupted by warmer purplish-plum tones, decisively placed yet delicately applied.
CK: I blended colors to create the plum you mentioned.  Overall, I began with rough pencil sketch marks, then smudged with my finger, then painted with strokes of oil paint and used medium to thin pigments.
VBA: Focus on the painting’s construction brings home the fact that on the most basic level, deep love of nature’s beauty moved you to paint a mountain.  It takes balls to do that Christina.  Some in the contemporary art environment are openly hostile to traditional representation with emphasis on aesthetics.  It’s considered aberrant to desire beauty.
CK: Unfortunately, it’s often the case that if it’s not shocking or disturbing or vulgar, or full of overt commentary, it’s not going to receive attention.  Don’t get me wrong, politically provocative work is important and can be valuable, but nothing is shocking anymore.  Mine is more an aesthetic practice although my artistic interests occasionally brush against social issues and the environment.  I hope many viewers will be touched and open to art for art’s sake.  Like Barbara.  Barbara Davis had already planned to include my sculpture in her group show before I went to Europe, then when she saw my new painting she decided to include it also, which is clearly due to her sensitivity.
VBA: We will have to invite Barbara Davis to join us the next time we meet.  Although it’s hard to imagine that fashionable lady in a dive like Poison Girl.
CK: Oh, she would enjoy that.
Image: Christy Karll, Swerve, 2018, Oil on archive paper, 17 x 16 1/4 inches (framed), from Barbara Davis gallery.

https://www.houstonchronicle.com/.../Sculpture-Month-Houston-an-immersive-experi...
Nov 29, 2018 - Could Sculpture Month Houston be a catalyst for cultural pilgrimages to Houston